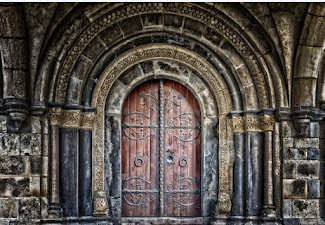 Have you ever had a friend, family member, or someone else you genuinely cared for who was about to do something that you knew was going to be painful, but there was nothing you could do but watch and hope for the best?  If you have ever experienced that, you have a basic understanding of how it feels to be clergy in the United Methodist Church right now.

Unless you've been living under a rock for the last couple of years, you've no doubt heard about the mess that is currently going on inside the United Methodist Church.  Some folks are saying we're splitting, but we're not.  We are, however, splintering, and the splintering is leaving shrapnel stuck in people I know and love.

I am one of those life-long United Methodists.  When dad was discharged from the army and mom and dad moved back here from Columbia, South Carolina, I was a mere nine months old.  The cross and flame is all I've ever known.  When Steph and I married, we embarked on a journey to find "our" church; not mine, not hers, but ours.  We went to mine for a while, a little country UMC.  We went to hers for a while, a small town southern baptist church.  We had plans of visiting others.  Her church turned me away from the communion table one day and I told my new bride, "I'm going back to my people and I'd love for you to come with me."  She did.  That was 30 years ago.

Five or six years later, I had an experience one night coming home from a fishing trip.  A few days later, after I got home from work, I sat there reading the newspaper, folded it up and put it in my lap.  Then I looked at my wife, and mother of my daughter, and said, "I have to go back to school."  She said, "Oh yeah? What for this time?"  I looked at her, not believing the words were even coming out of my mouth, and said, "I think I need to go to seminary."

"Yeah.  I think this is something I'm supposed to do."

So, at 28 years old, in 1999, I wasn't only a member of this denomination, I was about to begin the journey into ordained ministry as a United Methodist clergy.  I began the process, and in 2011 was ordained as an elder in full connection.  I have served small country churches.  I have served county seat churches.  I have served large churches.  A few years ago I cut back to part time, we bought a house in our home town, and I decided that my girls had lived in their last parsonage.  Now, I'm serving part time and believe this is where God wants me for this season in my life.  So, as I said before, this is all I've ever known.

Now, to the mess.

"Disafilliation." It's a word that's on everyone's mind right now who calls themselves United Methodist.  It has recently found its way into the church I love and am currently serving.  When a church begins the conversations about leaving the denomination, that leaves the clergy appointed to serve that church having to decide what they are going to do.  Are they going to leave the denomination and stay with that church?  Are they going to leave that church and stay with the denomination?  It's a painful decision to make and one that must be done prayerfully, considering what is best for the kingdom and our own families.

See, United Methodist clergy are not like Baptist clergy or Church of Christ clergy.  We are not hired by the local church.  We are sent by the Bishop to serve a particular community through a particular congregation.  We are appointed (sent) one year at a time, and each summer, either reappointed to that congregation, or sent to another one.  It's a system with its advantages and disadvantages, and some days, it's flawed at best.  But, it's a wonderful way to mix the gifts and graces of each pastor and each congregation.

That being said, I, like several of my colleagues, find ourselves in a state of limbo.  We want to remain faithful to our calling, and now we're just waiting and watching for God to let us know how that's going to play out.  We love the congregations we are serving, but we can only serve them as long as they remain United Methodist, or... we surrender our credentials and leave the denomination.  We have to choose.  Let me just tell you from personal experience, that is a gut wrenching decision to have to make.

It's gut wrenching because it doesn't have to be like this.  Because of personal agendas, strong personal opinions, false information, a myriad of "what if"s, and good ol' American individualism, no one is asking what is best for the kingdom of God in all of this.  It's only about what I want as an individual.  Churches are being split.  Witnesses are being damaged.  The world is being proven right about the "C"hurch in many instances because selfishness is leading many of these decisions.  Conversations are being had in our parking lots, behind closed doors, and in secret, and it is causing damage that only the Holy Spirit can heal.

In the words of Paul, my brothers and sisters, this should not be so.

Hopefully, it is not too late for the church I love and am currently serving.  Hopefully, we can see that we are better together.  Hopefully, we can become the home for all of the United Methodists in our county who did not want to leave the denomination, but their churches had the 2/3 vote anyhow.  But if not...?

It reminds me of Joshua 24, and this may get me into trouble because someone, somewhere, is going to read my next few lines the wrong way.

In Joshua 24, Joshua has gathered all the tribes together and begins to tell them what God is saying to them.  If you flip over to Joshua 24:1 and read through verse 13, you get a good list of all the things God had done for the people of Israel.  Then in verse 14, God throws down the gauntlet:

Now...  before anyone starts throwing things or calling my bishop, allow me to tell you why that's the verse that came to me when I began to write today.

Some disafilliate over the issue of homosexuality, but don't want to talk about the numerous scriptures about second marriages leading to adultery.  We want to point out the speck in others' eyes without paying one iota of attention to the log in our own.  We want to judge others as long as no one brings up our pet sins.  Etc.  Etc.  Etc.

My brothers and sisters, this should not be so.

After Jesus had left the Mount of Olives one day and was teaching in the temple, a group of angry men dragged a woman who had been caught in the very act of adultery to him.  How did he react?  They knew how they wanted him to react, but how did he react?  "Let the one who has never sinned throw the first stone."  What happened?  One by one, they quietly slipped away until there was no one left but she and he.  "Where are your accusers?  Didn't even one of them condemn you?"

As for me and my household, we have decided that there are way bigger things to be upset about.  We have decided that it is not our place to judge others because we cannot throw stones either.  We have struggled, prayed, and cried, trying to decide where we feel God may be calling us next.  With 23,000 people starving to death in the world every day (approximately) and the church arguing over the things we're arguing over, we (the Church) have left our one true love.

Adding to that the fact that many of the churches that are disaffiliating are doing so because they have been fed false information, forced onto them by some with an agenda, just makes it even worse.  Folks aren't even leaving over legitimate reasons.

So, if disafilliation is a conversation you are having, I implore you to listen past the rhetoric, gossip, half truths, and blatant lies for that still small voice of God calling to you through the chaos and inviting you to step away for some quiet conversation.

As for me and my house... we're United Methodist.